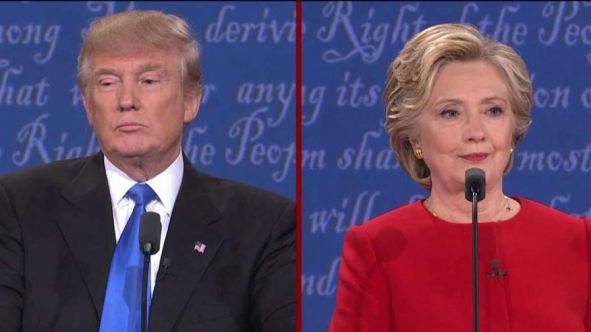 Last night’s winner and loser were clear-cut. Are these debates the last nails in Trump’s coffin?

Last night was the first presidential debate, and it was one for the ages – sort of. The historic implications of a political outsider and the first major ticket female candidate have made this election a fascinating one overall, but the first standoff between the two wasn’t what we expected. The circus didn’t come through our television sets and laptops, but something akin to parents in divorce court. I’m no fan of Hillary, but Mrs. Clinton owned the night, and she used Trump to do it.

It was obvious in the way that Clinton held herself upright and smiling for almost two hours that she had prepared for the debate. Trump faltered time and again, a product of his inability to pause and allow others to speak. The Republican candidate was his own undoing at this first debate, simply because he couldn’t keep his mouth shut at the right times. Coming to his own defense on every issue, as Clinton grilled him successfully, Trump continued to dig his own grave.

In a more grandmotherly tone than we’ve ever heard come out of her, Hillary Clinton charged Donald Trump with: rooting for the housing crisis of 2008, calling climate change a Chinese hoax, and withholding his tax information from the American public because of any number of sinister secrets. Trump’s weak counterattacks sealed his fate: “that’s called business”,“I do not say that”,“that makes me smart”. While the Republican candidate has made numerous awful, and nonsensical claims while on the campaign trail, last night was a moment of true clarification. For myself, anyways, the charisma and magic surrounding Donald Trump is gone after last night. It was as close to finding Oz behind the curtain as we’ve ever come in real life.

Continuing this debate style will undoubtedly mean success for Clinton…as an orator, anyways. It is yet to be seen if these televised spectacles will make an impact on the polls, but Trump had better pick up the slack, lest the ‘Clinton Train’ pull ahead out of the station.